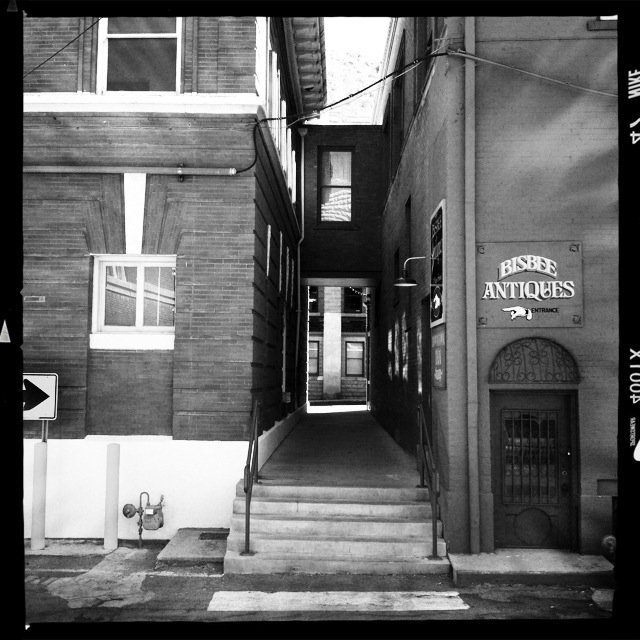 down the yellow brick road

It seems I’ve found a few little treasures, tucked away in a little town south/east of Tucson.  Bisbee, AZ had a lot to live up to.  I’d been hearing about the photo ops of this quirky town and seen some friends pictures, and  I, well, I had some expectations riding on this weekend road trip.  I’ve been lacking inspiration in the photo department and was hoping I’d get some of my photo mojo back.

I took this trip with my friend Amy.  We’ve been known to get into some photo trouble in the past with our “professional” cameras and I was hoping for nothing less on this excursion.  There was no trouble this time but we had one of those twilight zone type weekends that can’t really be explained.

The photo ops where everywhere.  There are more alleyways in Bisbee than I’ve seen in most large cities.  Mazes of culverts and stairs, blown out walls and creativity running loose in the streets.  It was more than just a creative vibe, each place we stopped to take pictures we met someone.  It wasn’t just casual hellos and moving on.  We spent time and heard stories.  All kinds.  How Art, the owner of a second hand store,  got into collecting toys and selling them, how his business grew and partners were bought out or moved on.  I’ve never spent that much time in a second hand shop.  I was enthralled.  It didn’t hurt that he had a great collection of old camera’s.  One of which I had to take off his hands (more on that in another post). We talked about childhoods and Radio Flyers.  He had complete collections of Star Trek figures and old magazines.  We had barely started taking pictures at this point but somehow it didn’t matter.  We left Art’s store that first day, promising to come back for the Holiday Brownie camera I had my eyes on.

We walked one block down the alley and as I took the picture for this post, a motorcycle club came roaring past us.  They pulled up and parked against the brick wall I was shooting and started posing for pictures.  Each one joked and told us stories about riding, photography and being a DJ in a small town.  They were brilliant together.  So much energy was coming off this group we didn’t want to move on.  We walked up the alley with them and they posed for more pictures.  We exchanged cards and email address with the promise of sending them some of the pictures.

We hadn’t been through one alley yet and I knew I was in the middle of finding my mojo.  I’ll try and take you through more of our weekend journey as I get through my pictures.  I suppose I’m hoping that as I edit my photos and share my story, I’ll be able to hold onto the feeling of having had true adventure.  One that is the start of something bigger.